During the 1980s as a student at Edinburgh University, I was lucky enough to catch a wonderful and rare glimpse into “high society”.  It was a fun and surreal little adventure involving a flying elephant, a chateau in the Normandy countryside, a missing billionaire (complete with personal bagpiper), rustic French farmers oozing with gallic charm and copious amounts of Champagne and Calvados – a local type of brandy made from apples and pears.

This strange tale started back in the autumn of 1984, after I arrived as a student at Edinburgh University.  During “Freshers Week”, one group that particularly captured my imagination during the University “Societies Fair” was the University Hot Air Ballooning Club. I remember there was a wicker basket parked in the foyer of the bustling, but somewhat rundown, hall at the Pleasance building in Edinburgh. At first sight, it appeared there was nobody present, however I soon became aware of a somewhat lethargic figure curled up inside the basket, seemingly catching a nap.

After a while, the bleary-eyed young gentleman popped his head up and started to giving me a quick promotional spiel about the merits of the club and hot air ballooning in general. It sounded like an exotic and laid back pursuit with a bit of panache about it. Without further ado, I enthusiastically signed on the dotted line, before heading of to check out somewhat more extreme sounding sports. However, I decided cave diving and wing suit jumping definitely weren’t for me – I was now sold on hot air ballooning !

I started coming along to evening pub sessions in “Proctors” Bar in Buccleuch Street, a cozy traditional Edinburgh pub located just off the Meadows. I learned more about this fascinating pastime, the theory behind flying a hot air balloon and met some of the colourful and rather eccentric characters involved in the club. It wasn’t long, before I was soon getting up at the crack of dawn to go on my first flights over the East Lothian countryside.

These were great experiences, ascending through layers of inversion cloud and sometimes skimming low over village houses and trees before landing unceremoniously with a bump in some crusty old farmer’s field – one of whom told us that the potatoes couldn’t be expected to move for our benefit. As a downside though, ballooning could also be a lot of waiting around, setting up and unexpected changes to plan due to fickle Scottish weather conditions.

One evening at Proctors Bar, it was discussed at a club meeting, that someone had came across details of an almost mythical sounding event held in France known as the “Rassemblement International de Ballons” which was organised annually at Chateau Balleroy in Normandy. The event was hosted by the owner of the Chateau, American Billionaire Malcolm Forbes, the “Forbes Magazine” publishing magnate.

Forbes was unashamedly wealthy and  famed for his diverse passions which included collecting fine art objects, acquiring desirable overseas properties, motor-yachts, hot air ballooning and Harley Davidson motorcycles – his exclusive motorcycle club going by the name of the “Capitalist Tools”. His list of personal friends included US presidents and film stars such as Liz Taylor.

Being somewhat of an opportunist, our club secretary took the chance to write to Malcolm Forbes to ask whether our humble university club might be able to attend this most prestigious of international events in the ballooning calander. The logic went that Forbes had Scottish ancestry and our balloon specially commemorated the first hot air balloon flight in 1784 by Scottish aviator James Tytler, thereby creating a connection. As background, Tytler himself was a colourful and multi-talented individual who seemed to have spent much of his time spawning children and fleeing the consequences, amongst other things, between fleeting moments of genius. 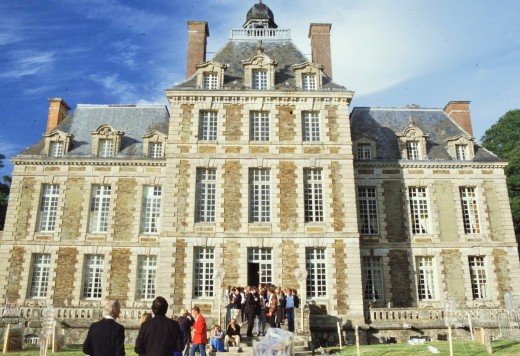 To cut a long story short and to everyone’s delight, Forbes bought into our proposal without hesitation and invited us along to attend the party, offering in addition, to cover all our costs in full. And so it was, that one evening in June 1885, a motley crew of students, in a beat-up old Ford Transit van, boarded a cross channel ferry bound for Cherbourg. The following photographic record details our wonderful few days at Chateau Balleroy – one of my few brushes with “High Society”, when I could stroll into the chateau lobby at any time and pick up a mysteriously refilling glass of bubbly. 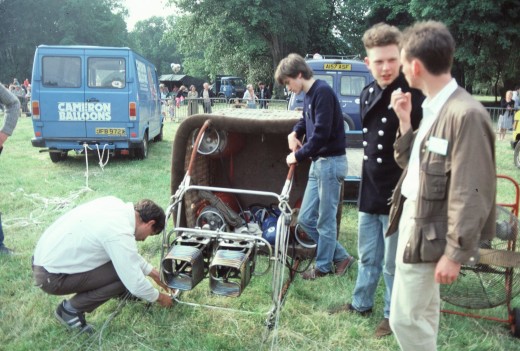 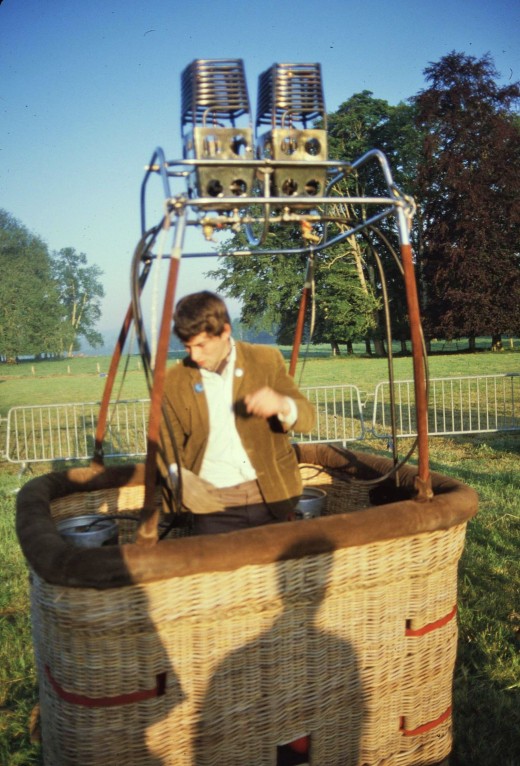 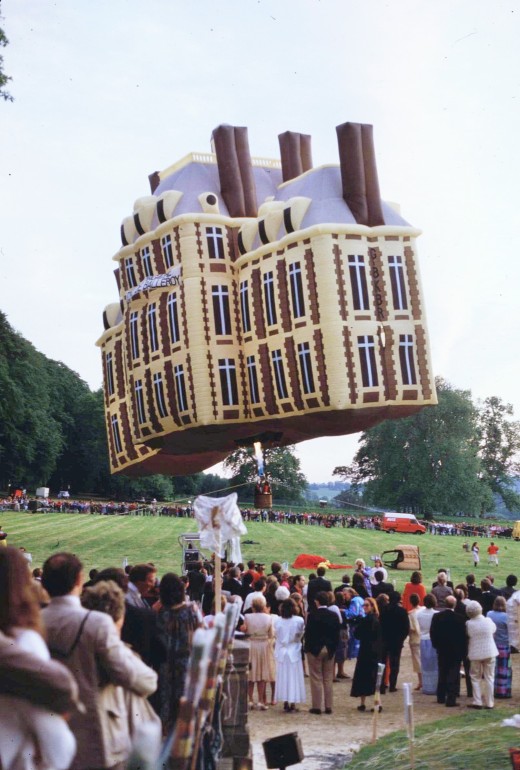 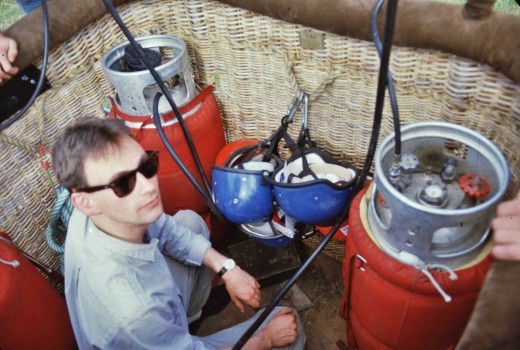 Our team made a few enjoyable flights during the weekend, gliding low over the bocage landscape of Normandy, with it’s numerous small villages, historic farm houses, woodlands and apple orchards. One of the highlights of the few days must surely have been a flight, made with a distinguished guest, on a perfect settled summer evening; lifting off smoothly from the park in front of the Chateau. The guest of honour in this instance was Kip Forbes, one of Malcolm Forbes’s sons, who went on to adopt many of his father’s personal and business interests in later life.

Like any self respecting American of Scottish ancestry, he was, of course, accompanied by his very own personal Scottish bagpiper. The piper player a few soulful aires as we drifted effortlessly above the Normandy countryside – though I do remember the cattle in the fields below were not quite so impressed with this performance (I must admit, fan o’ the pipes that I am, it was just a wee bit loud in a cramped balloon basket). 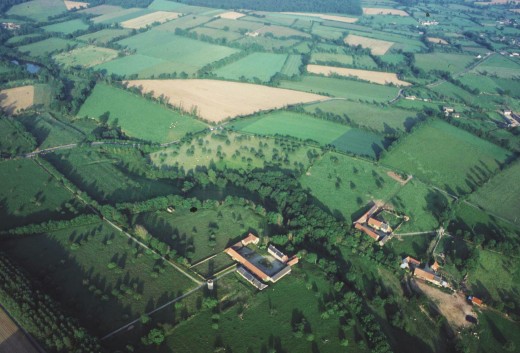 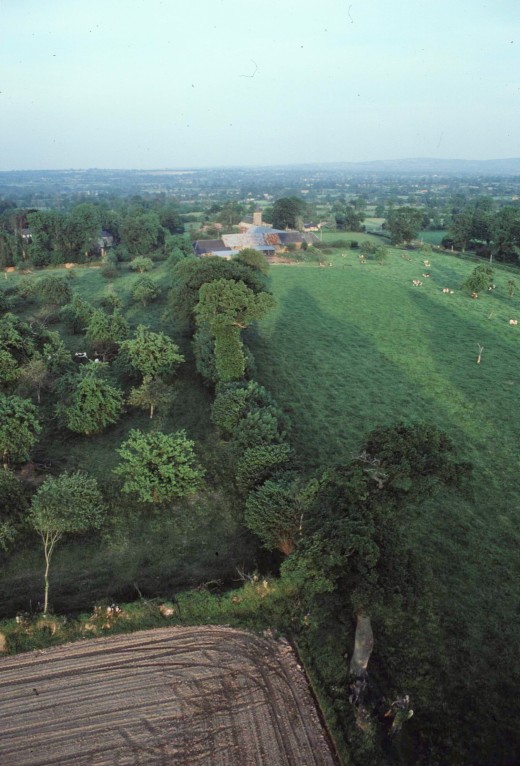 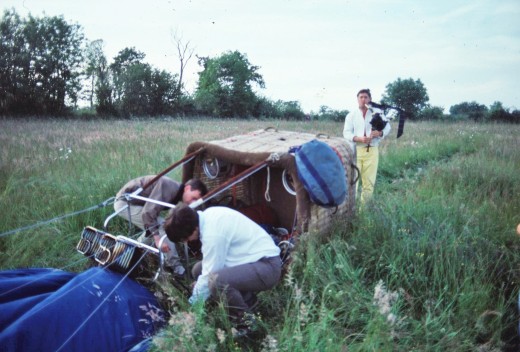 Our landing with a jolt and a bounce in a farmers field, heralded yet another impromptu performance on the pipes; a stirring rendition of “Scotland the Brave” this time to celebrate the completion of a successful mission and a Scottish landing in Normandy (balloonists normally crack open the bubbly at this point). It wasn’t long before all the commotion naturally attracted the attention of the local farmer and his family, who soon joined us on the scene, eager to learn why a bagpiper was playing raucous tunes in his field.

Being somewhat used to the more hostile farmers of the Scottish Lowlands, I was amazed instead to be greeted here with outstretched, welcoming arms brandishing gallic charm and bottles of local cider – with hindsight though, perhaps having a billionaire in tow had some influence on the reception !

After packing up, we were invited back to the farmhouse for further refreshments including much more potent Calvados, a Normandy specialty. The festivities continued long into the evening and it was only in the wee small hours that we made it back to Balleroy and our hotel, dropping off Kip Forbes en route. Little did we know at the time, that the mysterious “disappearance” of Mr Forbes Junior had caused quite a stir amongst his security people. He was apparently long overdue and no-one had got around to alerting the staff, this being in the days before everyone carried a cellphone around. 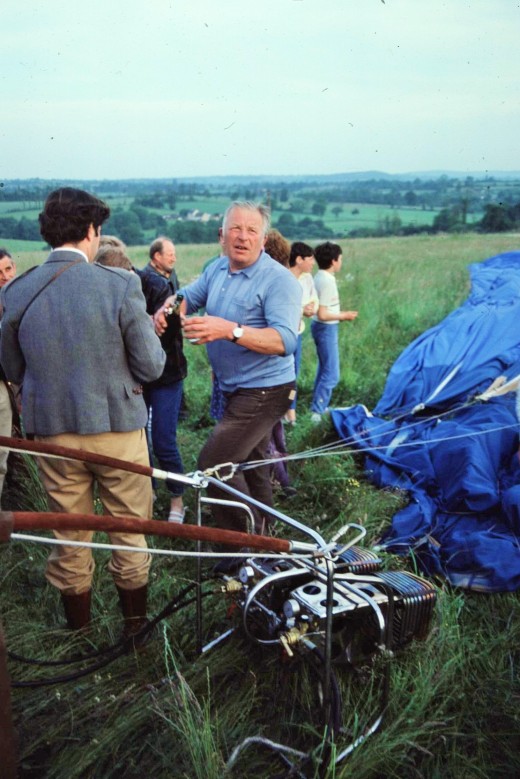 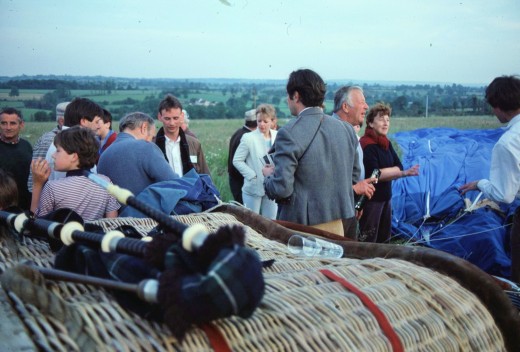 In addition to such highlights there were many other pleasant sideshows to occupy our time around Chateau de Balleroy. These included demonstrations of vintage gas filled balloons, music and local folk dances. The weekend finished off in suitable style with a grand firework display over the Chateau; a fitting end indeed to what had been an extraordinary few days.

So mission accomplished; our weary entourage slowly made it’s way back to the Port of Cherbourg, taking time en route to enjoy some relaxed downtime in the beautiful countryside around and sampling the local delicacies. It was a unique few days for me, unlikely ever to be repeated and, quite literally, a fascinating glimpse of “high society”. 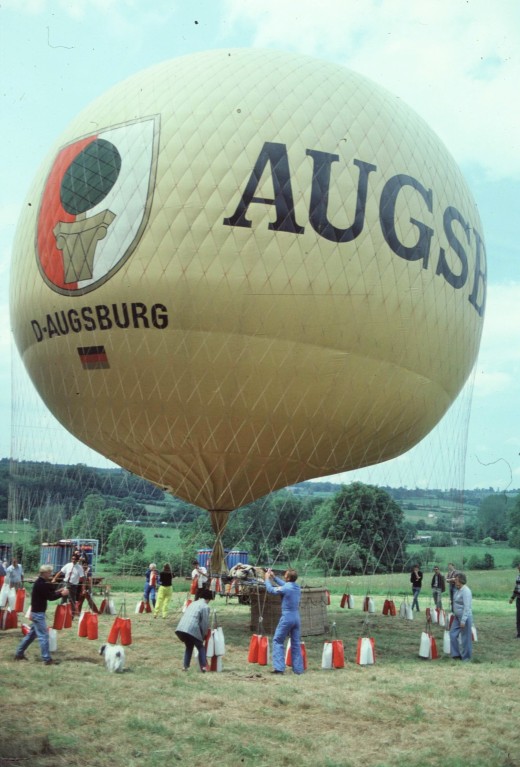 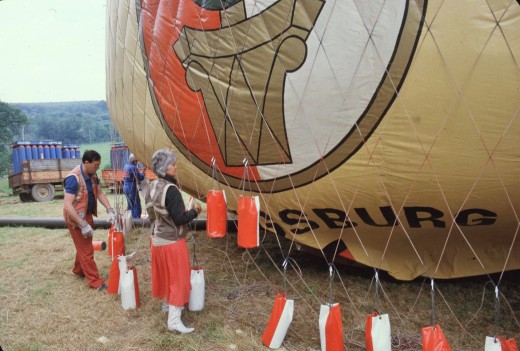 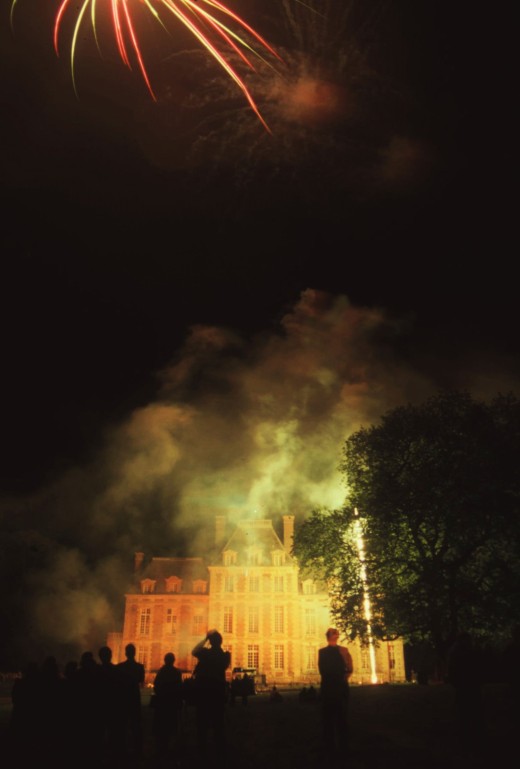 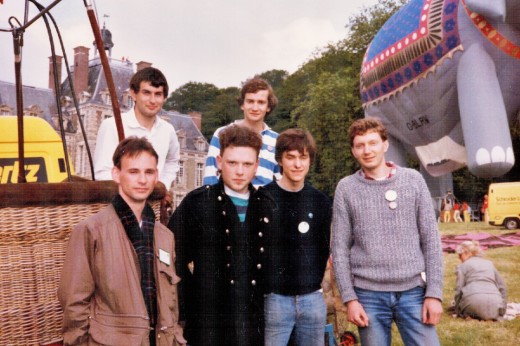 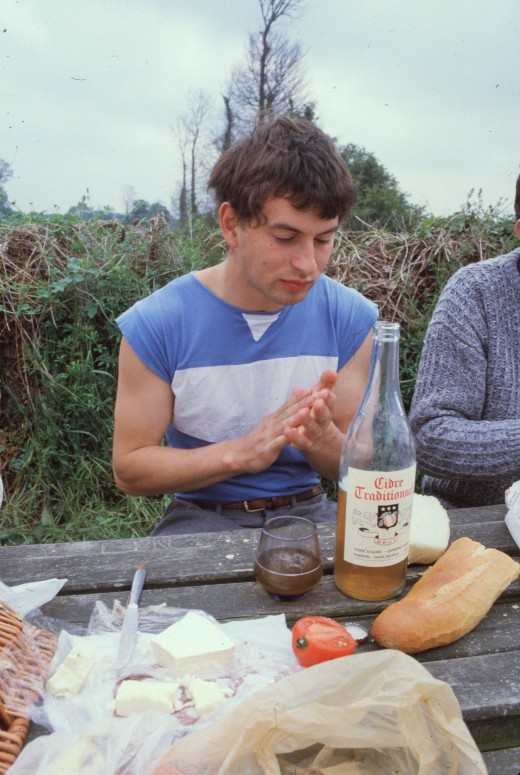 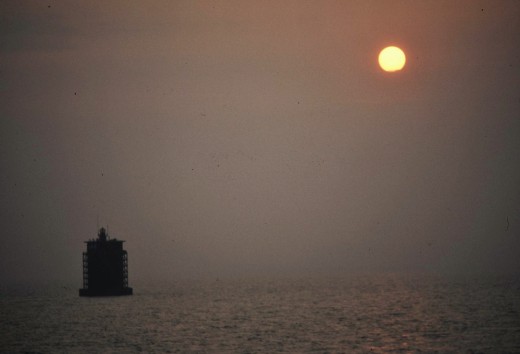