In the Allgäu Alps

Green Hills; the vibrant pastures of the Iller Valley near Obersdorf

Whilst very popular with German holidaymakers, the Allgäu region by Obersdorf in SW Bavaria, is virtually unknown territory to British visitors, who instead head off in droves to “bigger name” alpine resorts such as Chamonix, Grindlewald and St Moritz (perhaps pausing briefly en route to visit Ludwig II’s famous fairytale castle at nearby Neuschwanstein). However, the attractions of this corner of the alps with its vibrant green meadows, broad valleys and colourful towns, set against a dramatic background of alpine peaks, fully justifies a detour; making it all the more hard to understand why a British vehicle registration plate is so seldom seen in this neck of the woods.

House in the woods; rustic accommodation in Obermaiselstein

I got to know the Allgäu after my move to Aachen three years ago and was very impressed by this remarkably sunny and welcoming corner of the Bavarian Alps. I stayed with my family in the village of Obermaiselstein, one of the five so called Hörnerdorfer in the Illertal valley just north of Obersdorf, Germany’s most Southern town.  When we visited, most of Northern Europe was permanently shrouded in cloud and  unrelenting summer monsoon rains. By contrast, we basked under clear blue skies and temperatures every day which climbed up to 35 degrees C (a little too hot for a Scotsman); until the very last day when amazingly the temperature dropped by a staggering 25 degrees C and fresh snow appeared on the mountains !

Obersdorf, itself, is a bit of a cul-de-sac and is cut off from neighbouring Tyrol by a ring of lofty alpine peaks, which could account for its lack of foreign visitors. The main valley can become pretty crowded at peak times, as everyone heads of for holidays during the same few weeks in August. Even then, however, its easy to lose the crowds, who tend to hang out around the same old tourist spots; with a little effort and imagination you can easily discover delightful villages and alpine trails in relative and uncluttered solitude. 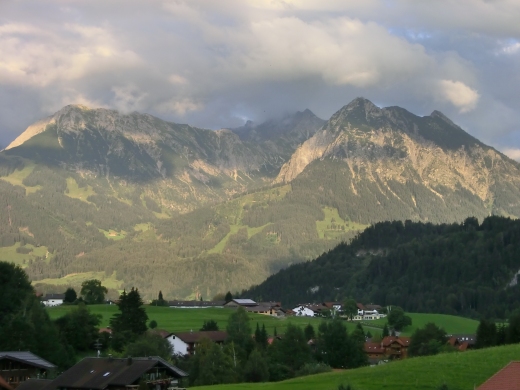 Evening light on the Nebelhorn

Like most places in Southern Bavaria (Oberbayen), Obermaiselstein, is set in a picture postcard location; overlooking the renowned peak of the Nebelhorn, with attractive wooden houses, in traditional Bavarian-style, which climb up the valley slides to the forested slopes and meadows above the village. What I love about this corner of Bavaria is the quality of craftsmenship in building construction and the sense of pride local people have in keeping their surroundings looking attractive. Everything seems to be well looked after here, but not in a clinical or superficial way; settlements and agriculture blend perfectly with the mountain backdrop, just like it’s always intended to have been that way.

Behind Obermaiselstein, its just a stone’s throw to quiet hamlet of Bolsterlang where the laidback Hörnerbahn gondola gently glides visitors up the slopes of  the Weiherkopf peak for superb views across the Illertal to distant mountain ranges.  After enjoying a welcome beer at the chilled-out café bar by the summit station, it’s then possible to walk along the ridge to the summit of the Riedberger Horn mountain (1787m), passing through idyllic meadows, wetlands and spruce forests en route.

Overlooking Obermaiselstein toward the Allgäuer Alps; Obersdorf is behind the first ridge

On the ridge toward the Riedberger Horn (1787m)

From the top of the Riedberger Horn, there are views down to the isolated hamlet of Balderschwang. This tiny hamlet claims to host “the oldest living thing in Europe”, an ancient yew tree reputed to be between 2000 – 4000 years old. From my own perspective as a forester I think that the Fortingall Yew, in Perthshire (reputed to be 5000 years old), looks far older than the unassuming Balderschwang specimen. From the Riedberger Horn you can walk down another ridge to Grasgehrenalpe by the Riedberg Pass (no mean feat with a moaning kid on your back !). 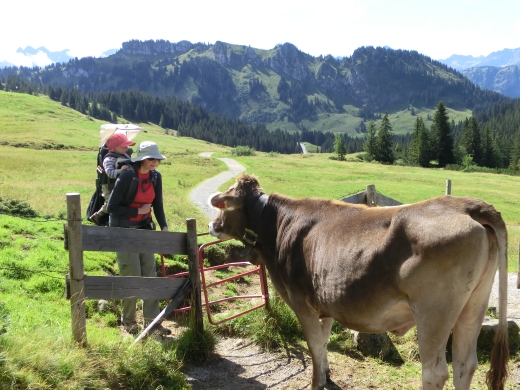 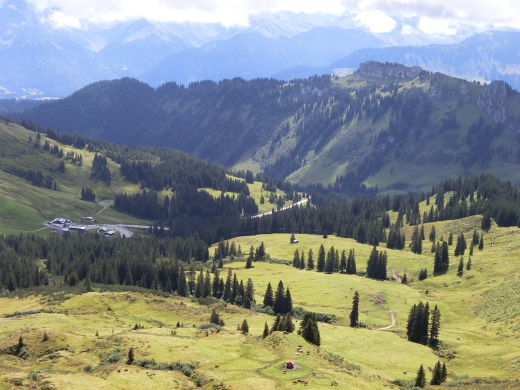 View towards the Riedberger Pass and the rocky Bestler ridge

Heavy load; have kids, will travel… 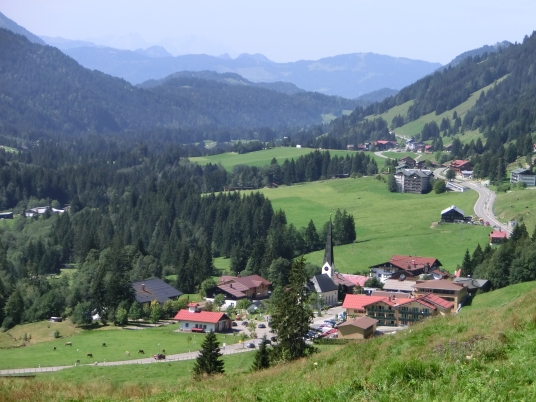 The isolated hamlet of Balderschwang, home to an ancient yew tree 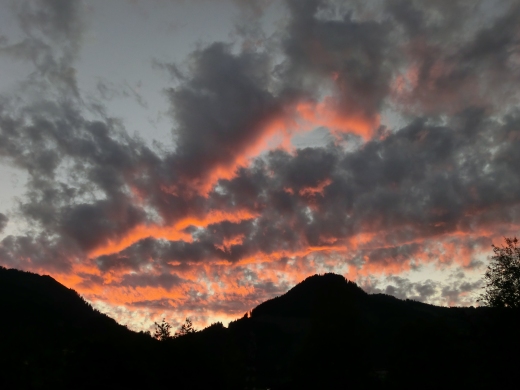 Grateful for a day’s “baby sitting” service (courtesy of Martina’s family), we headed off up the Kleinwalsertal valley to the SW of Obersdorf. This unique valley is actually part of Austria but is something of a misnomer, as the only access by road is through Oberbayern. The administrative arrangements here are somewhat bizarre with many German public utilities providing infrastructure such as postal services in what is essentially a part of the Austrian Tyrol. The name Kleinwalsertal come from the area’s original inhabitants who migrated from the Walais area of the Swiss Alps and then settled here.

I found the lower part of the Kleinwalsertal somewhat overdeveloped and so, we headed up to the top end of the valley at Baad, skipping the trendy tourist resorts and glitzy casinos for another day. Our rough plan was to head up towards the grassy summits which mark the watershed with the Tyrol province of Austria.

Last chance inn; the sleepy alm hut at Mittlere Spitalalpe in the Derrenbachtal

Al fresco dining with a view to the imposing Widderstein range

The going was good and the walking quiet and meditative on the first leg up to the sleepy alm hut at Mittlere Spitalalpe in the Derrenbachtal. After a welcome radler we carried on up the steeper slopes toward Derra Alpe where one lonely cow-heard maintained a relaxed vigil all summer long over his heard from a small alpe hut. Apart from the cow herd, we encountered nobody else up here and enjoyed the evermore dramatic views of “Allgäu’s Matterhorn”, the Großer Widderstein (2533m), a seemingly unassailable, rocky peak set in splendid isolation.

By now we had clearly identified our target for the day, the  Güntlespitze; a pronounced grassy peak at 2092m and remarkably reminiscent of a hill in the Southern Highlands. The final section to the summit ridge proved to be remarkably airy and the steep grassy slope a little slippery; however it wasn’t long before I was on the top and enjoying a superb 360 degree panorama. Like any good Scottish peak there were also resident midges ready to welcome me. We headed back down toward Baad.

Ascending the Güntlespitze; Martina at Derra Alpe with the dramatic peak of the Goßer Widderstein (2533m) behind

The grassy summit of the Güntlespitze (2092m) looking into Austria

Descending from the Güntlespitze toward Derra Alpe 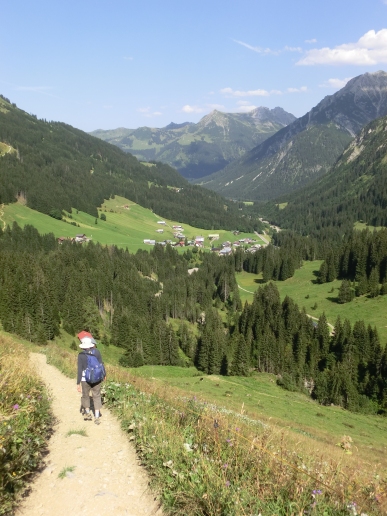 Final descent to Baad at the head of the Kleinwalsertal

Back at the ranch, it was great to enjoy relaxing around our colourful accommodation in Obermaiselstein. In particular the kids loved cooling off in the many village water troughs and enjoying impromptu water fights. There’s nothing like a long mountain day to make you appreciate creature comforts (like a bath in a water trough !). Just down the road the community had organised an impromptu BBQ party in the woods for families; they provided  the venue and you simply turn up with stuff to grill and some booze (and apple juice) and off you go ! We enjoyed a couple of relaxed hours eating “wurst” with the locals and other guests; the fine scent of wood smoke filtering up into the air.

Therapeutic garden; a good place recover from a mountain hike

On the other side of the Illertal and up a side valley from Sonthofen, is Bad Hindelang; another colourful mountain village and “Wellness” Resort (currently the big in thing in Bayern for burn’t out executives). The Imberger Hornbahn is another great wee gondola trip for youngsters and provides easy access to mountain trails. In the hot weather we experienced, it was fine enough some days for us to find a shady spot in a mountain meadow for a picknick whilst the kids played; before adjouning to a mountain café for a much needed pint and a rosti – what a life indeed ! Beyond Hindelang is the Hinterstein Valley which has a more remote feel complete with colourful “hillbilly” style residents. This wonderful valley needs to be explored further one day and provides some great access to wilder country.

The Imberger Hornbahn above Bad Hindelang 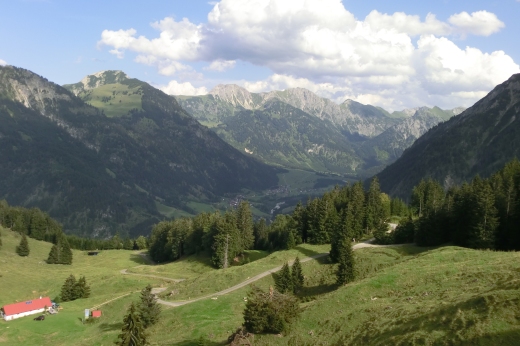 View to Hindelang Hinterstein from the Imbeger Horn 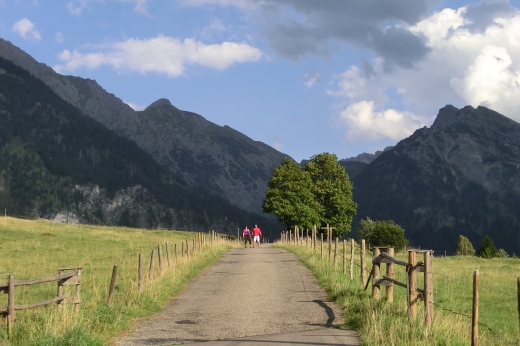 On the road; at Hindelang Hinterstein

Around the last days of our Allgäu trip, the temperature dropped dramatically and fresh snow even appeared on the peaks; not something we had anticipated in August. We headed to the Bergbauern museum in Diepolz by Immenstadt where traditional farming practices and alpine life is showcased to visitors through a series of reconstructed farmsteadings and alp huts; the kids loved it here and got to milk (plastic) cows, “drive” real tractors and dress up in traditional dirndle and lederhosen costumes (I must admit to not feeling quite so good personally that day; with blood dripping from a hole in my head, the result of hitting it off the vehicle tailgate earlier that morning !).

Traditional farming at the Bergbauern museum in Diepolz by Immenstadt

Injuries besides, the place was stunningly beautiful – shafts of sunlight pierced the clouds and cloaked the hay meadows with a vibrant emerald green. A rainbow appeared; surely a portent from above, the arching colours of the spectrum descending to settle over the village kirk of Diepolz.  Was it just the bump to the head that did it, or “does God surely exist”, I thought to myself as I looked across to the distant snow capped peaks; if so, he surely lives here in the Allgäu and has touched the place with magic… I went down the hill and headed to the local A & E Department, blood oozing steadily from a hole in my head…

Rainbow’s end; colours of the spectrum over the Illertal