Carnival in Aachen: Vanquishing the spirits of winter… ?

Joie de vivre, frivolity and “letting your hair down” are not characteristics most often associated with the Germans (with the possible exception of the well-known Munich Octoberfest) who are better known for their more sober traits including “attention to detail”, a sense of duty and the famed work ethic. However, anyone arriving in the Rhineland during the “Tolle Tag” (or crazy days) of the Carnival in February will be in for a serious dose of culture shock !

Happy Smiles: Carnival is when the people of the Rhineland let go !

During these heady pre-lent days, it seems that the whole population dons silly costumes; banks and railway stations become impromptu party venues (with free drinks dished out) and seemingly everybody goes a bit mad. It’s not that Germans don’t like to have fun; it’s just that, unlike in  Britain (where humour creeps into business meetings, news broadcasts and interviews), the Germans often choose to pigeon-hole their enjoyment !

From a Scottish perspective, Carnival (or “Karneval” auf Deutsch) is a bit like Hogmanay in fancy dress.  Unsuspecting visitors, arriving in a major town such as Cologne or Aachen, will bump into (and trip up over) all manner of carnival detritus including drunken people dressed as pirates, cave men, carrots or even as giant tubes of tooth paste; it’s all quite surreal really !  In true German style, of course, there are those who take the Carnival more “seriously” with special societies complete with all manner of strange ritual, ceremonies and organisational hierarchies. Whilst the latter will leave the outsider feeling somewhat perplexed, the street carnival is fun and accessible to all.

Watch Out: Carrot people are coming !

In Southern Germany Carnival is known as “Fasching” and originally had the purpose of vanquishing the spirits of winter. In towns like Freiburg, there is more of a “Brother’s Grimm” feel to proceedings with dancing witches and masked nature spirits more reminiscent of Tibetan tantric dances. In the Rhineland however, Carnival has a more contemporary feel and quite frankly anything goes.  The long weekend between “Fett Donnerstag” and “Rosenmontag” is the wildest of all with organised float processions in most towns.

Although Aachen has large organised carnival processions, we decided to join a smaller event with friends in the smaller suburb of Brand. During these float processions all manner of weird and wonderful costumes are worn and sweeties and treats are thrown out of the floats to passing by-standers. The goodies are thrown with some force and you can end up getting quite a sore head if you’re not careful; I can’t ever imagine this ever happening in Britain these days (not unless all the spectators have first been issued with protective safety glasses and helmets by over-zealous health and safety officials !). It’s possible to scoop quite a cache of treats at these processions with many bringing a carrier bag along to mop up the bounty.

Carrot Crew: With orange noses at the ready

Cup Cake Ladies: Not to be messed with 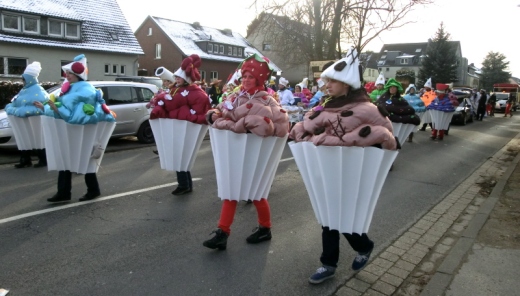 Anyone for More Cupcakes ?

Hoovering up the Bounty

No shortage of Goodies Lying in the Gutter 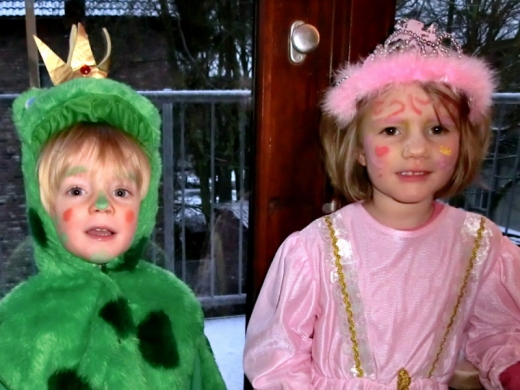 The Frog and the Fairy Princess

Despite the Carnival frivolity, the spirits of winter have not yet been vanquished; indeed this week the snows have returned with a vengeance. Anyway, after all the grey days of January, it’s a great chance to get out and enjoy fun outside in the snow.  Me and my daughter Zoe, even designed our own special Scottish carnival snowman to greet visitors at the front door !

Scotland Comes to the Carnival

Snow Fun in the Eifel near Aachen